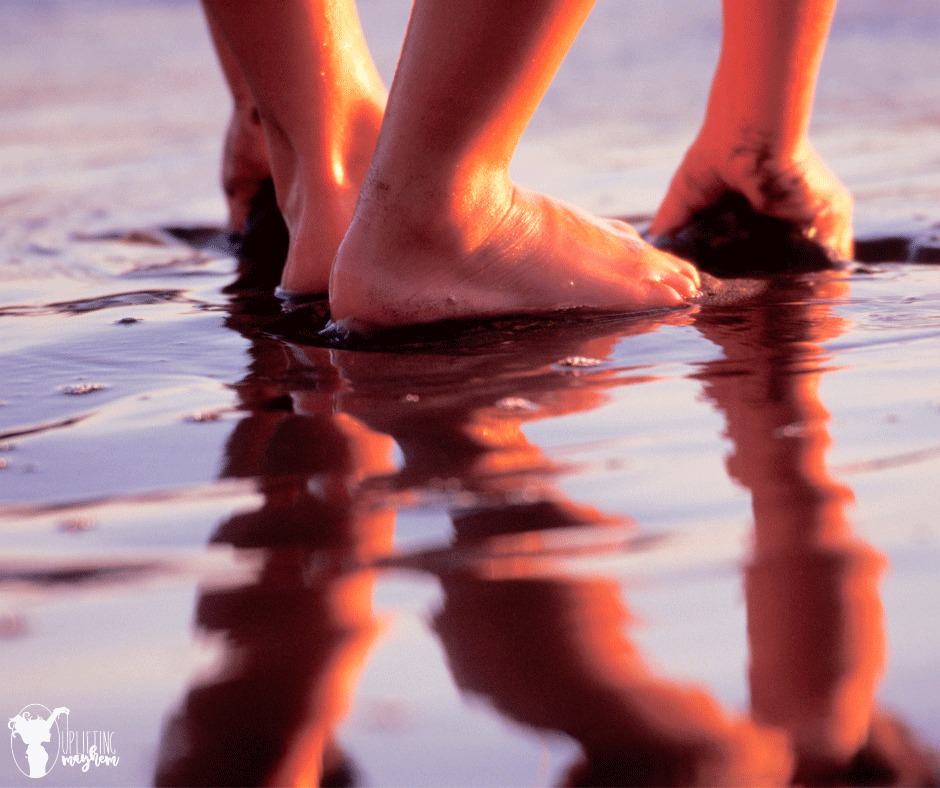 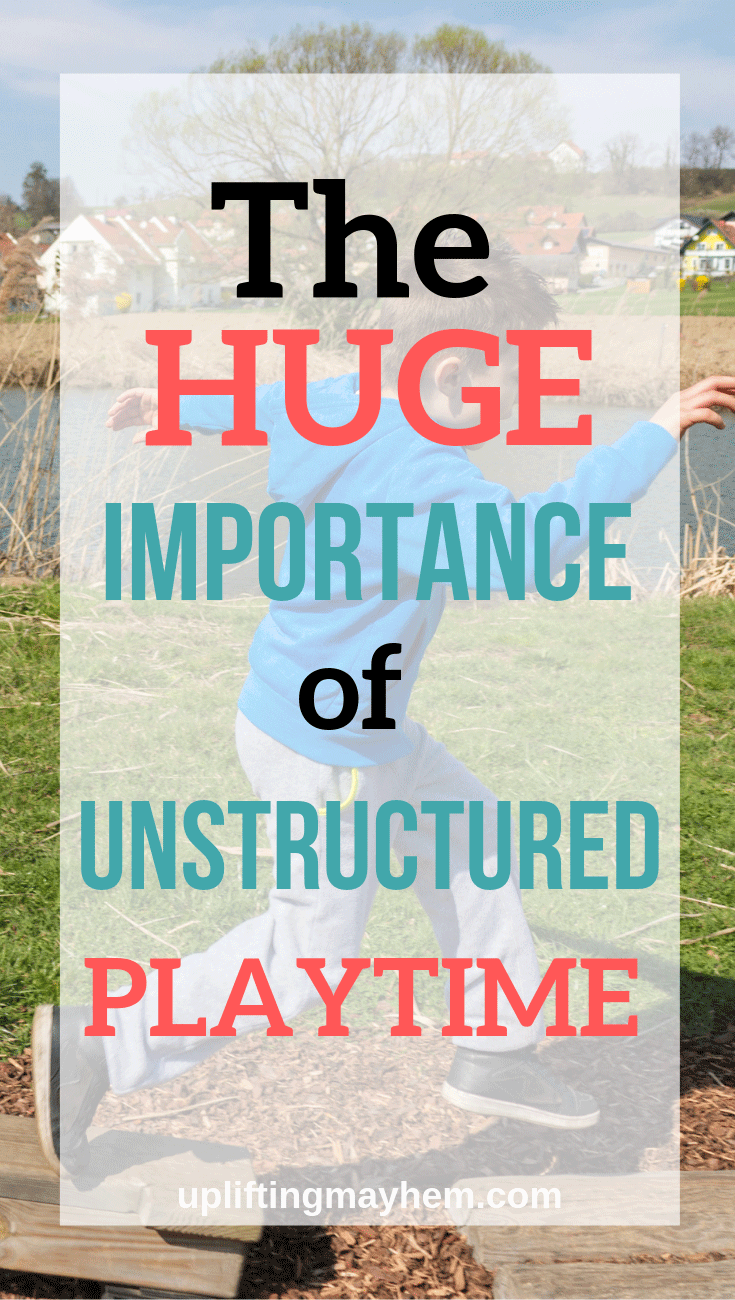 The first time I started catching the importance of unstructured playtime was shortly before I started homeschooling which was in 2015. My family was attending a Thanksgiving dinner with extended family, and my kids were so excited to play with cousins they hadn’t seen for a long time. I didn’t think anything of it as my boys were actively running around with other kids.

There were a couple of us sitting on the sidelines talking when another mother said to me,

“How do you get your boys to play and run around without getting bored?”

This question took me by surprise because I had never thought this was an issue parents dealt with. My boys were active and had imaginations that could occupy hours and hours of time. I looked at her unsure of how to answer. Of course I gave the answer of, “I don’t know, they are always like this.”, but this did not appease her curiosity.

Of course there was something I did right??

However, at that moment I had no idea what I was doing.

She pointed to her son who was sitting on a bench near the corner of the room, and there I saw a young boy with a blank stare telling me that he was bored out of his mind. He was upset because she wouldn’t let him play his handheld device (I think it was a Nintendo DS). It was at this time that some stars connected in my mind.

My husband and I have never allowed our boys to play video games. We have never given them handheld devices and when they play the IPAD it is for 20 minutes at a time. You want to know why my boys’ hardly ever get bored? I would say it is largely because of this one decision we have made.

In this world though, I am not above being extreme. HA HA I want my boys to be creative and be motivated to put a piece of themselves back into the world. I don’t want them consuming and inputing large amounts of media and games that it leaves little room for their minds to conjure up something new!

This was my first experience in realizing the importance of unstructured play time.

Here is my second experience that I want to share with you. My oldest son was a busy second grader. Yep I said second grader! He was in school all day, with various activities scatter through out the week.

Each day we would send him to school and he would return with what I liked to call the “after school madness” You know what I’m talking about! Homework, chores, instrument practicing, getting dressed for practice, searching for the lost shoe, the list goes on and on.

My son was with friends throughout the entire day, but as we returned home he made a comment that was yet another eye opening experience. He asked me if he could go outside and play with friends. As it was nearly dinner time, I responded quickly and said, “Son, you have been with friends all day! Sorry, not today.”

He started crying and through alligator tears he cried, “Yeah, but I haven’t been able to just play all day long!!” For a second grader I found this to be a profound statement.

This is when dots began to connect in my head and I realized that my son didn’t consider school as play time. He didn’t consider playing soccer as time playing outside with friends. All of these activities were structured! He was being told how to think and move leaving him feel, as I would put it, a bit empty.

I began trying to provide lots of opportunities for my sons to have unstructured play time. This was difficult when school and activities took up a lot of time already. It was shortly after this when I was impressed to take my kids out of school and begin the terrifying rollercoaster ride of homeschool.

Don’t worry! If you don’t homeschool keep reading! You can still make this work beautifully!

I will tell you this about homeschooling…..IT WAS LIFE CHANGING!

They learn to problem solve as they try to figure out the best way to build a bridge across the canal that can be removed when they are not there. They learn to use the resources they have to build and create! Their imagination is on full blast as they dive in and out of cover as they fight hard so they can live to tell the tale.

Oh, the tales that I get to hear! The animals, flowers and treasures brought back to me are some of my favorite stories to share. My boys are happier as we have continue to strive to find the balance of structured vs non-structured play time.

As parents we need to work hard to provide these opportunities as much as possible. I understand not everyone lives near the edge of the wilderness where their kids can roam free. Not all unstructured play occurs outside either. Here are some ideas that you can provide some unstructured play time while still living in a city or living a busy life.

On the way home from school, stop at a park and let your kids play for 30 minutes while you catch up on emails or calls you may need to make. Leave items that you can accomplish at the park while your kids are playing and get other things done earlier.

Don’t worry about entertaining your kids while you are there….this is why it is called unstructured play time. It is training your kids to think for themselves and not having an adult telling them how to do something!

This is kind of a big deal. When you get toys for your kids that make noise when you push a button, or when it has to be put together a certain way, this doesn’t give the child to think outside of the box. The toy does the thinking for them resulting in a purely entertaining toy.

Think of toys that require your child to think….Legos, K’nex building sets, magnetic tiles, snap circuits, marble runs. These are all fantastic options to provide for your kids. Simple things can also just be blocks for building.

#3 – Don’t be quick to break your child’s boredom

I have had many times when on of my boys come up to me and said the infamous line, “I’m bored!!” Don’t immediately fix this problem! Allow them to be bored, this is when their best creations come to life!! Give them a few ideas and if they are still bugging you, start naming some jobs they can get done instead! They will quickly find something to do.

Also, on a more important note….limit screen time. I know this is incredibly hard! TV and video games are easy babysitters that will keep your kids occupied for hours and hours. However, allowing this comes with its own unique consequences. This one topic deserves its very one blog post! In short, over time this makes them unmotivated for real life! Why live reality, when their life is so much cooler online?

HA HA I know you are saying….What? How is this considered unstructured playtime? How many times a day does your child have the opportunity to just think and look at the world around them? The car is a perfect time for them to be still and to be with their own thoughts.

Remove the distractions and let them be still. Their imagination will start working and will roll over to other times when they need to use their imagination.

These are just a couple of ideas to help you start seeing the benefits that come from unstructured play time. It is so important and you will see your kids happier and less stressed. At first it may be a pain for you because they will be coming to you expecting their time to be filled by the next big activity.

Let them be bored!

Let them play outside!

When they are building with blocks or legos, don’t interfere.  Don’t make it better and just allow their minds to figure it all out.

Relax mama! Step back and let your child’s brain do the work for you.