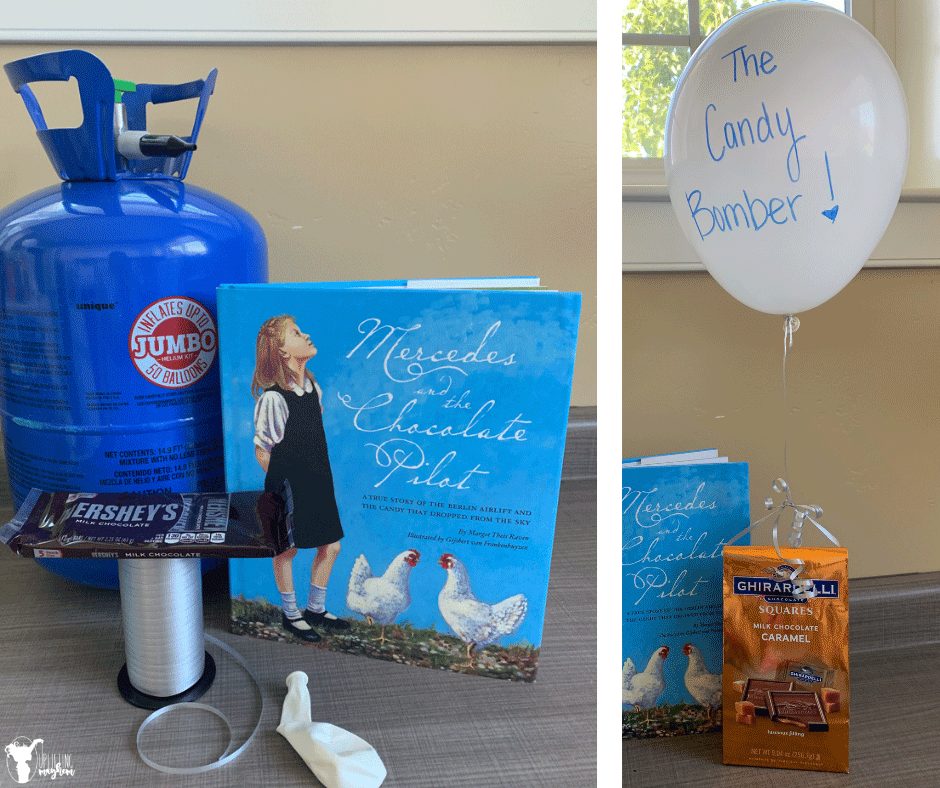 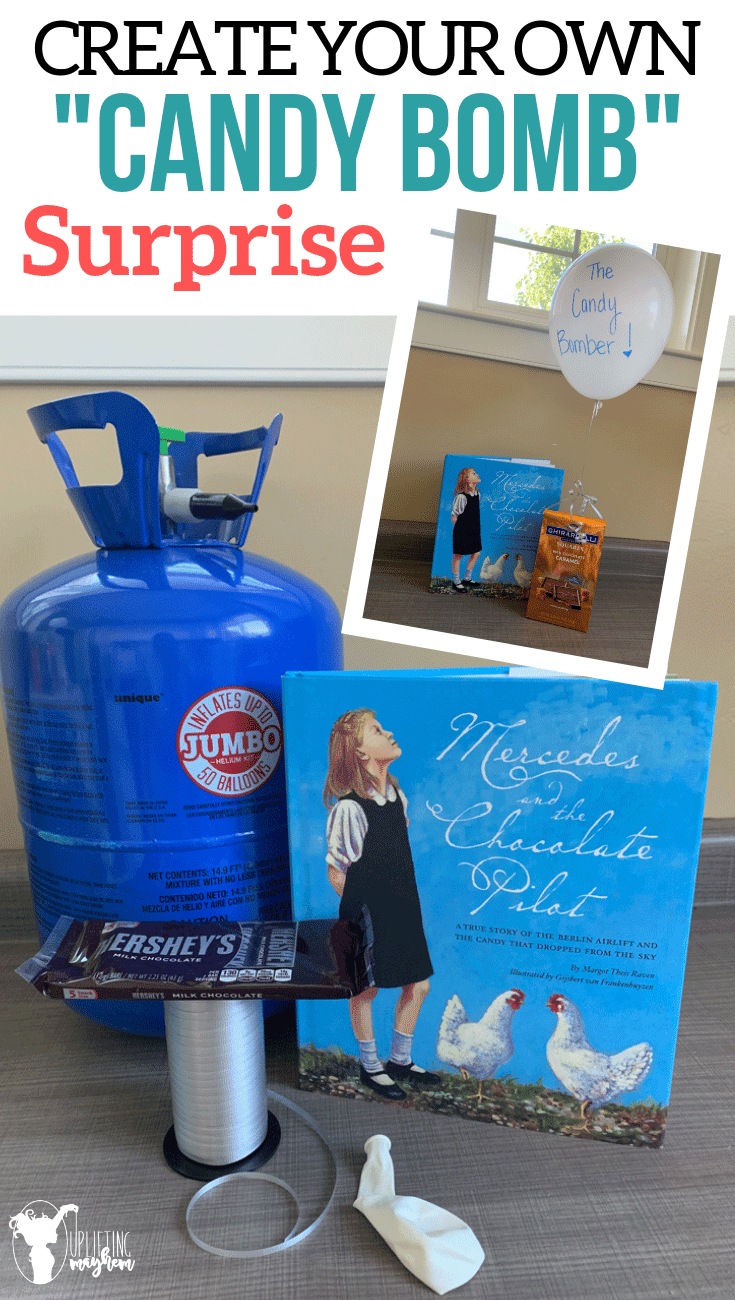 Once upon a time, there was a man who was nicknamed the “Candy Bomber”, “Uncle Wiggly Wings”, “Chocolate Pilot” along with many other nicknames. In a time when the world was recovering from World War II, there was still much uncertainty and unrest in the country of Germany. After WWII, Germany was split among 4 countries: Russia, Great Britain, France and America.

Berlin, which is Germany’s Capital city, was also split among the 4 countries. West Berlin was split among Great Britain, France and America with Russia getting East Berlin (picture below is from the Candy Bomber, written by Michael O. Tunnel). 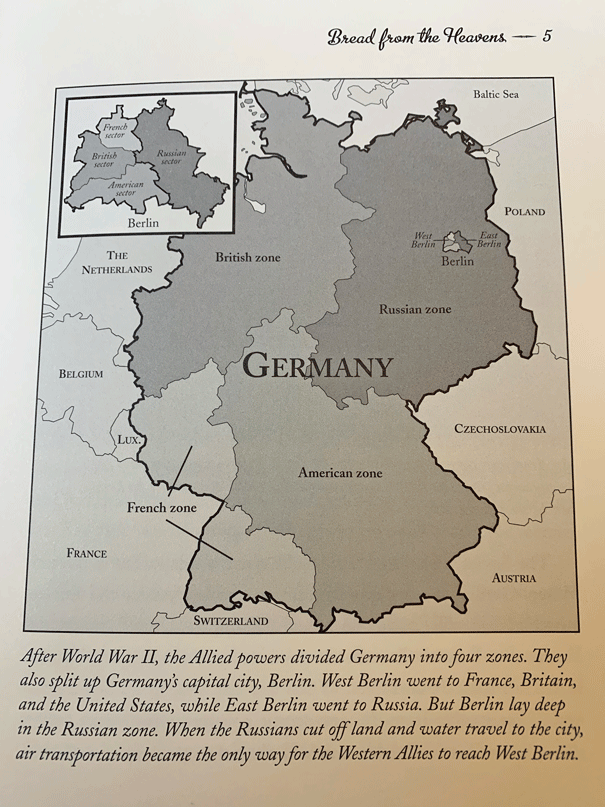 Russia wanted to push Great Britain, France and America out because Berlin was so deep inside the Russian zone. Russia was promising West Berlin food and supplies if they agreed to live under the Soviet Rule.

However, the people in West Berlin cherished their freedom more than having a full stomach. Russia blocked all forms of transportation into the city hoping the people would come crawling to them for food, giving up their freedom with it.

The hope and need for freedom was much greater than the need for food. This caused hunger all over West Berlin. With ground transportation blocked, France, Great Britain and America began flying supplies of food and other necessities in by plane.

Multiple planes would land everyday providing much needed supplies to the people of West Berlin. Neil Halvorsen, who would soon become known as the Candy Bomber, was one of these pilots.

How he became the Candy Bomber

One day when he was touring around the war ridden city, he met a group of children in Berlin. He gave them the only thing he had which was 2 sticks of gum to split among 30 of them.

He wondered if this was a mistake, but soon witnessed a touching scene. Those that didn’t receive gum were given a piece of the wrapper to smell. No fighting occurred which left an everlasting impression on Halvorsen.

He wanted to do more for these kids and had an idea! He gathered a bunch of candy and tied a parachute to them. Before he landed he would fly over a group of kids and drop the candy out of the plane. This started the beginning of the Candy Bomber.

He and his buddies dropped over 20 tons of candy and gum over fourteen months.

The gratitude shown by the candy recipients ran far deeper than simply the act of getting a chocolate bar. One child said this as he remembered a day walking home from school,

Suddenly, out of the mist came a parachute with a fresh Hershey chocolate bar from America. It took me a week to eat that candy bar. I hid it day and night. The Chocolate was wonderful, but it wasn’t the chocolate that was most important.

What it meant was that someone in America cared. That parachute was something more important than candy.

Hope that someday we would be free. Without hope the soul dies.

The candy bomber represents a greater desire to do good in this world. To provide hope to individuals who may be struggling physically, mentally or spiritually! As I read this book, I began thinking how we can spread the love that came with each parachute that was dropped.

That is when I came up with the, “YOU HAVE BEEN CANDY BOMBED” idea. Here is what you need to make your very own Candy Bomb! 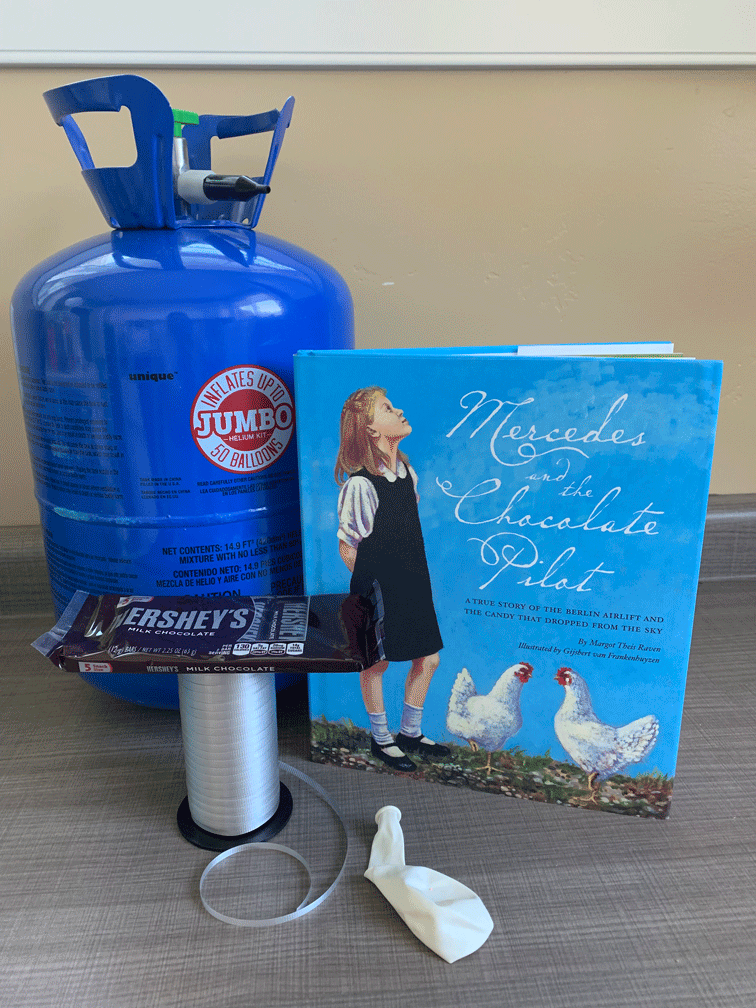 STEP #1 – Print out these 2 printables

You Have Been Candy Bombed

This first printable would be best printed out onto card stock, or taped onto a colored card stock. This tag you can attach to your candy if you don’t want to write on your balloon. 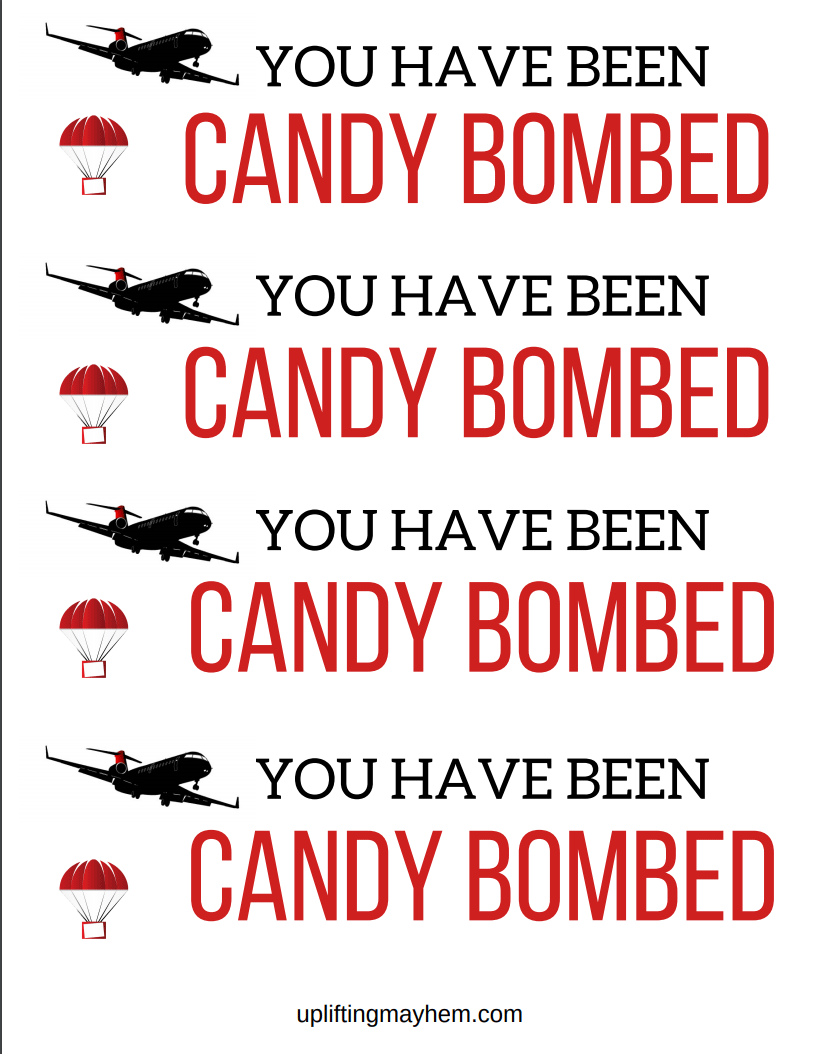 This printable shares the story about the Candy Bomber. Whenever there is a story behind something it always makes it a little bit more meaningful. 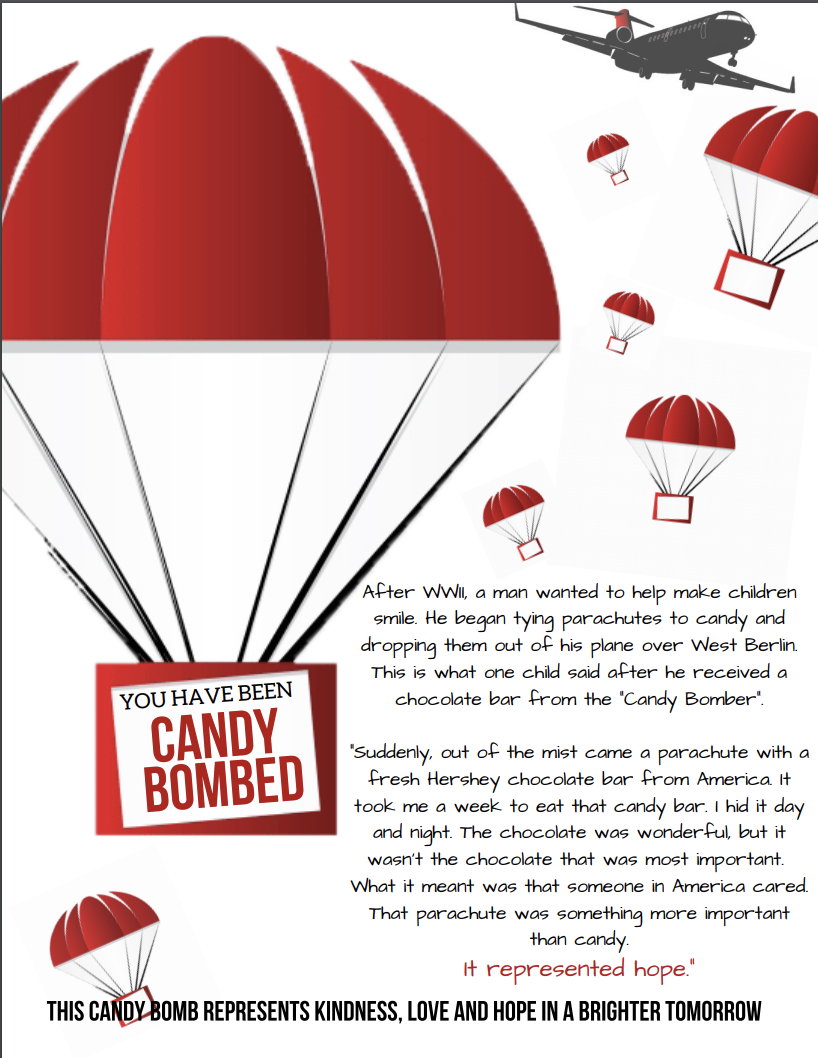 Step #2 – Blow the white balloon up with helium

You could do any color you want really. I like the white as it represents purity and heaven which is where we receive our hope. I have written Candy Bomber on the balloon, but that is completely up to you. 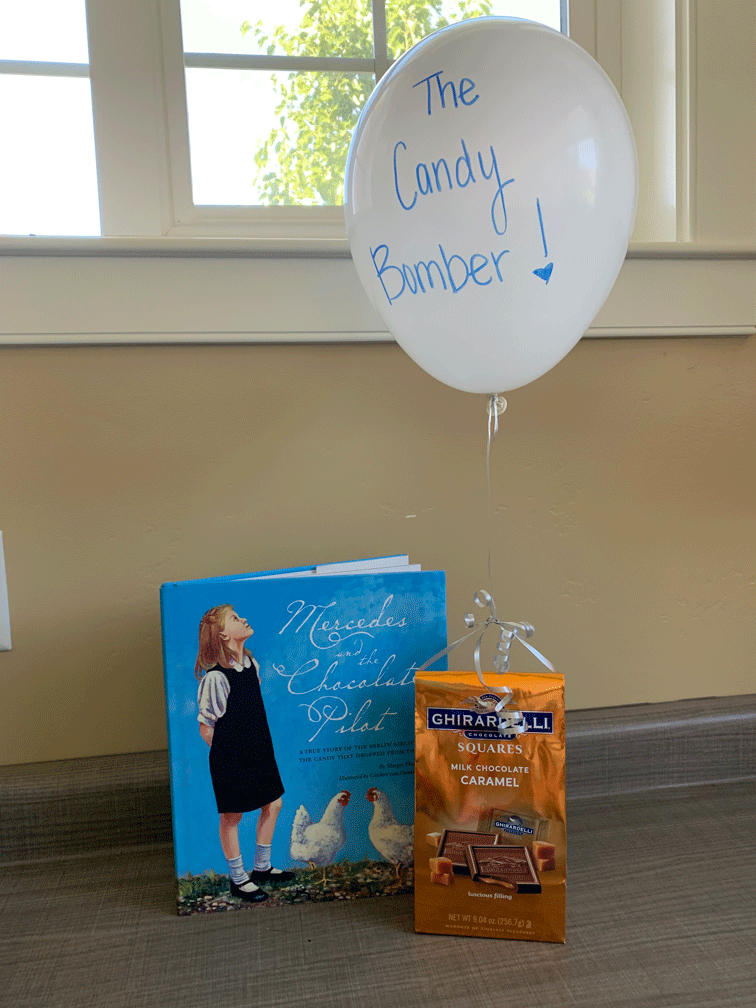 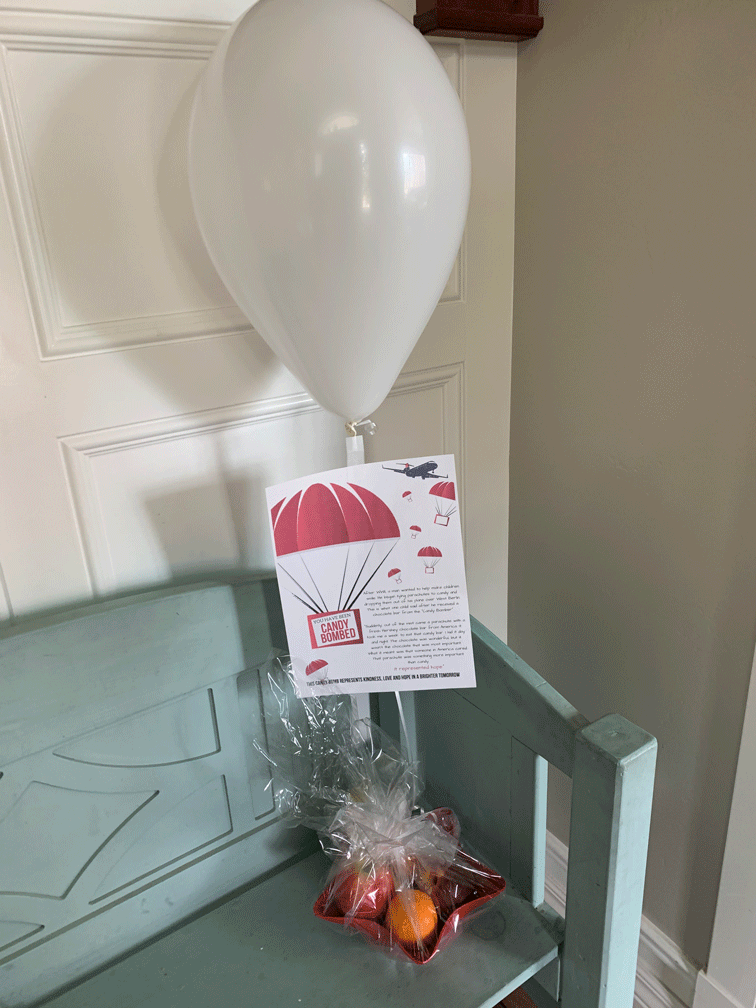 That is it! Now all you need is someone to “candy bomb”. You can take this with you when you visit them, or you can doorbell ditch them. Of course my boys prefer to doorbell ditch. They love the adventure of it all.

We have also started buying the story of the Candy Bomber and giving this as a gift as well. Here is a children’s book that is fantastic, or there is this easy read with lots of pictures that my boys loved too.

Have Fun!! I would love to see your Candy Bomb! Take a picture and tag me on Instagram @upliftingmayhem