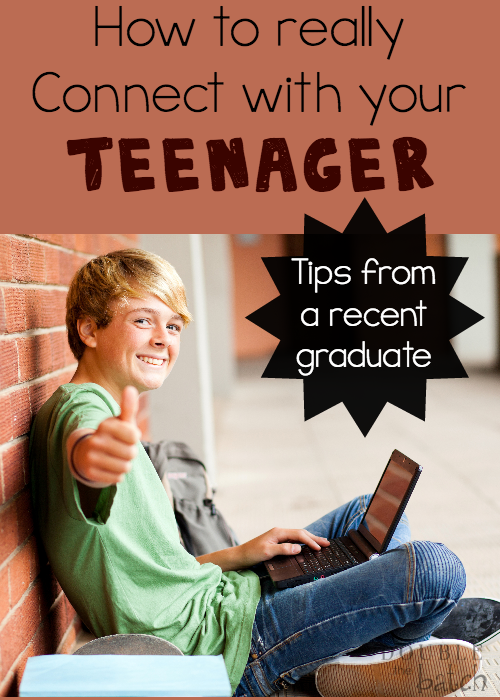 Ok, so I’m not saying I was the roughest of the rough during my teenage years but I definitely went through my own teenage “rebellious stage” that caused some of my family members concern. I refer to grades 7th-9th as the brutal years where kids can just be outright cruel. The years where friends turn into enemies and enemies turn into so called “friends”. Granted, I know life is hard for teenagers well through high school as well but at least for me, looking back, it was those middle school years that were the toughest on me.

I think there are countless ways you can help your child through those years when it seems like their friends are their biggest influences. I’ve taken some thoughts on what my parents did to help me (as well as the things I wish they had done) that seem to go along with some of the themes I’ve noticed in my family classes, and compiled a list in hopes that it will inspire you how to connect with your teenager in your own way while raising your teenagers.

Be Present: physically, mentally, and emotionally

OKAY, so how often are we present physically but not really present mentally when in the same room with someone? There were a couple of times during my rebellious stage that I’d be alone in a room or car with my mom and I’d really want her to try and talk to me but I could tell she was in “worry land” far, far away so I always figured it was “her loss” instead of just striking up a conversation myself. Now that I’m older, I totally catch myself doing the same thing with my younger teenage siblings who I know are dying to tell me things but I’m too zoned out into my own mind to notice.

Teenagers catch on to if you’re really interested in what they have to say or not by if you’re asking follow up questions and showing the appropriate emotions. If they are really upset or happy over something they want to see those same emotions in you. Some of my most memorable experiences with my mother are when she’d get emotional while I was telling her something that was extremely difficult to go through or say. Being emotionally present is HUGE in a teenager’s life because, at least for me, everything revolved around my emotions.

This usually starts before they’re teenagers. You can’t protect your kids from everything obviously. They’re going to find out things eventually, and if it’s not from you it will be from their friends and other outside influences, guaranteed. Recognize when your children are beginning to wonder and/or ask questions about certain things, and educate them according to their age and maturity level. I’m not just talking about where babies come from. Educate them on the importance of choosing friends that influence them to be better, not giving into peer pressure, standing up to bullying, loving without condoning, maintaining good morals, etc… the list goes on and on. After talking with my sister about her young children, it seems like by the time parents feel like their children are old enough to really understand a conversation about these kinds of things, they’ve already faced a couple of the challenges involved in them.

Get to know their friends

Can I just say how much I loved hanging out at my friends’ houses whose parents had an open door policy? I don’t mean open door policy as in they let just anybody in but I mean that I always felt welcome and cared about there as if I was in my own home. I had friend’s homes that I’d call my home away from home because their parents always took an interest in my life and what I was up to. Looking back, I think that is so smart! My friend’s parents usually knew who I was currently liking, what my morals were, my thoughts on certain topics, my family situation, etc…  If you really invest the time to get to know your teenagers friends, you can usually (hopefully) tell if there are some red flags you should tactfully talk to you teen about.

ASK Specific Questions and Show LOVE No Matter the Response

During the times I struggled the most as a teenager, I would turn inward and shut my family out. Obviously, this is normal for teenagers but I think secretly, even with the leave me alone vibe that I was putting out, I really wanted my family to understand things and sometimes all it took was asking questions.

I remember one particular night where my mom pulled me into her room after a big argument we’d had over my choice of friends. I was fuming but I sat with her while she poured out her heart of how much she loved me, worried about me, and wanted the best for me. When I finally mellowed a little she asked me question after loving question of what was going on in my life. I had been spending a lot of time with a boy I wasn’t supposed to be with and when she found that out, instead of getting angry right away, she began directing her questions about our hang outs: what we did, who was usually there, how I felt about everything, etc…Instead of feeling like she was interrogating me, I actually felt like she was genuinely interested and I think that’s a tricky line that parents get to figure out with each of their children. Teenagers don’t like to feel like their being grilled, especially if they feel guilty about something.

I tested my mother a lot, in our heart-to-hearts, by giving a small honest answer that I knew she wouldn’t like just to see how she would handle it before letting her in on anything bigger. Sometimes she would miss out on some of my “bigger stuff” (like kissing the boy I wasn’t supposed to be with) because she’d get upset over the “little” thing (hanging out with him). I know it’s really hard not to be disappointed or upset over something your teenager did that was deliberately disobeying you, but maybe figure out the worst of things first, let them know your love for them is unconditional but you’re not ok with their actions, and then talk of an appropriate consequence. Whether they are furious over the consequence or not, it’s important for them to know you don’t think less of them because of their actions.

If you loved doing this while they were little, it’s especially important during the teenage years. Their schedules might be totally insane, but try and find a time that you get to have a one-on-one with them. You might even trade off time with mom and time with dad since the experiences will be different. Not only does this open up communication with your teenager but it could potentially help them in making decisions knowing they’ll be having a chat with mom or dad later in the week. 😉

As frustrating as it is, sometimes your kids don’t want to learn from yours or other’s mistakes. Sometimes, after doing all you can, you have to let them make their own mistakes and hope they come out on the other side stronger because of it. Every child is different and every child gets to experience different things. I’m only 21 weeks pregnant with our first little boy and I’m already freaking out about his teenage years. My husband finally said to me, “Karine, can we please take this one step at a time and let him be a baby first before we start worrying about him as a teenager?.”  Looking back though, that’s how my parents did it. They took things one step at a time and figured it all out on the way. They weren’t perfect and definitely made mistakes but lucky for them, they had double the batch to try it all out on. 😉

What have you found helpful during those teenage years for you and/or your children?