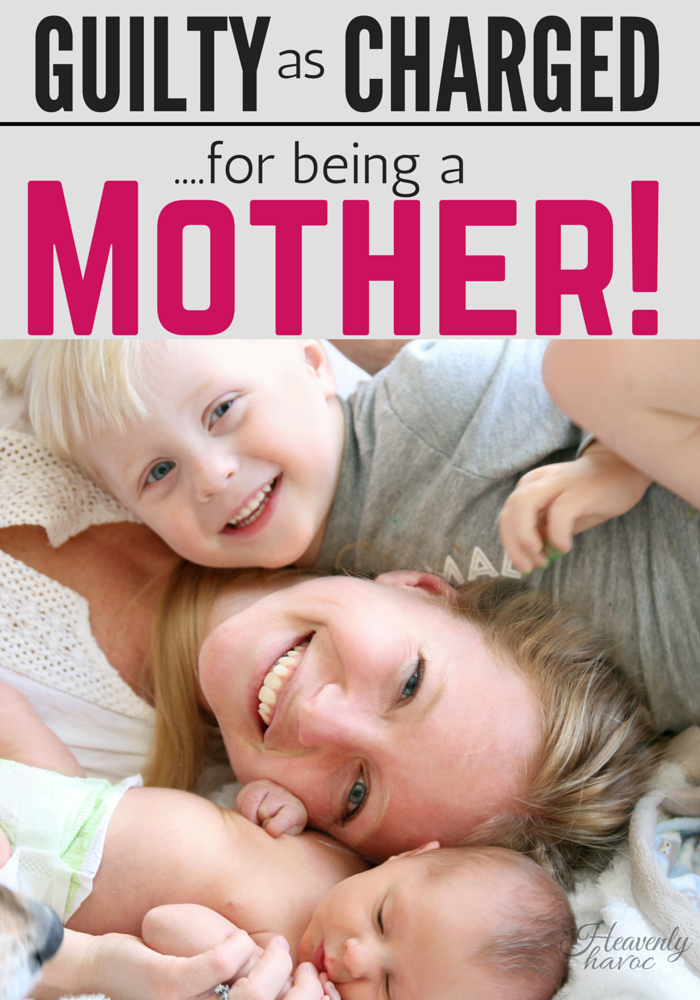 I think I have “Guilty Mom Syndrome”

Today was just not a good day. I will not bore you with all the details. If you are a mother, you already live them…every day! I’ve been lying here in my bed for several hours trying to come up with something profound to write today. Instead my mind was flooded with all the things I did ‘wrong’ today.

Then I started to think of all the things I constantly feel guilt for as a mother. It is an ON-GOING NON STOP mental and emotional battle. From the minute my kids were born I have found more and more things to feel guilty of.

I don’t know. I guess it’s because I absolutely love to torture myself everyday. So why not just feel guilty….

Why the heck do we do this to ourselves? I hear it all the time with moms everywhere…

Well it’s no wonder we have no energy or stamina by the end of the day! While it’s true that the hand that rocks the cradle ROCKS the world, there’s no need for us to take the whole world on our shoulders. After all, the world never asked us to! I’m not saying that I’m gonna start a lazy mom’s group where our creed is

But I’m not gonna lie when I say that sometimes I feel like hanging a plaque on my wall that says:

Maybe we shouldn’t feel guilty at all but instead grateful. Grateful for all the things that we’re DOING. Because if we’re doing anything it all it means we haven’t GIVEN UP! And gosh golly, any kid who has a parent that refuses to give up is a lucky kid. The next time you’re tempted to feel guilty because someone 3 feet high accuses you of not performing your “motherly duties” you can politely say,

But in a more sincere tone, I AM guilty, and I should be tried  for the following:

Are you feeling Guilty Mom? If so, I hope it’s for the right reasons!

It Was Mom: A Mother’s Day Tribute To Moms #itwasmom
Watch this video on YouTube.