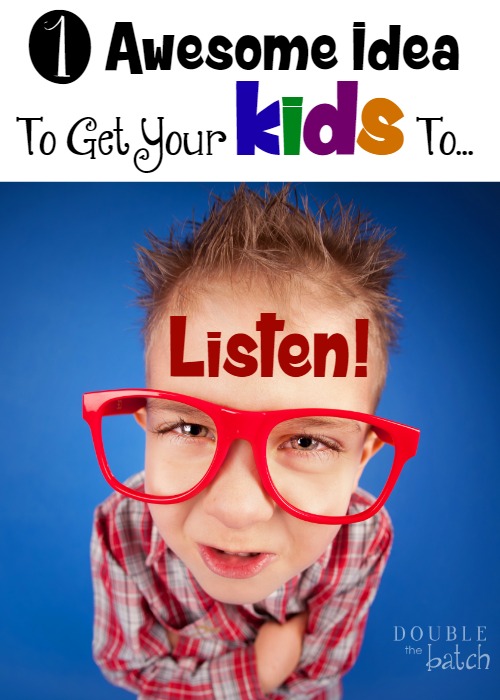 Tired of being ignored and wondering how to get your kids to listen and obey you again?  Maybe give this a try.

A few years ago, when my oldest three daughters were 8, 5, and 3, they started having trouble with their hearing.  It had been an ongoing problem that progressively got worse until my children’s ears seemed incapable of hearing the sound of my voice.  It was selective, however.  If I mentioned anything about cleaning up the house, it fell on deaf ears.  But, if I mentioned a fun outing or the word ice cream, miraculously their hearing returned! Requests to get ready for school– deaf again. Family movie night- Perfect hearing. This made me suspicious that they just might be ignoring me– their mother– the one who through arduous pain and sacrifice gave them life.  Can you imagine? I’m sure I’m the only mother who has experienced this.

I tested my theory and confirmed that, in fact, there was no actual hearing loss involved. They were just being little turkeys and choosing not to listen to their mother hen– and my feathers were ruffled.  I was done with it. I was done with being the only one who cared if the house was clean. I was done nagging and nagging to get them to do anything to help out. I was done begging them to get up and get ready in the morning. Done. Done and done.

I looked up the word “Mother” in the dictionary, and it didn’t say anything about a crazy woman who everyone in the household knows is their personal slave, but who wanders around giving orders anyway. Nonetheless, that is exactly how I felt.

“Sweet princesses,” I began, “since you all have chosen to ignore my requests and apparently feel no responsibility to help take care of the house your father and I have so kindly provided for you to live in, it is now my responsibility as a parent to help you learn a hard lesson so you don’t grow up to be worthless slugs. For the next three days, I will be ignoring all your requests.  Whether they are requests for food (except for those too young to make their own food,) requests for help with homework, requests to play with friends, or basically requests for anything that isn’t life threatening– they will all be ignored by me.  Furthermore, I will not be doing any work around the house.  Instead, I will assume your role by playing all day.  The responsibility will fall on the three of you to make sure the house is tidy before you go to bed each night.  If you make sure that happens for the next three days, the punishment will end and I will respond to your requests again.  If you do not, then I will continue ignoring you until you do. Any questions before my ears suddenly stop working?”

The consequence commenced.  There was weeping, and wailing, and gnashing of teeth.  I was the declared the meanest mom in the world!  Didn’t I even care about them??!!  I kind of wished I actually had some temporary hearing loss to block them out.  It was so tempting to say something to try to quiet them down, but I stuck to my guns… or my computer, which we all know is how moms play when they are home bound, and incidentally a great conduit for helping you ignore your kids- which I, of course, do not recommend under normal circumstances. But, these were not normal circumstances!  Walking around your house all day and being treated as if you are an annoying ghost by your co-inhabitants is enough to drive a lady mad!  It was time for a serious change around these parts and I was determined to make it happen.

I made sure there were easy to make food items in the house- cereal, bagels, sandwich fixings and such- even some fruit and veggies (lest you feel prompted to report me to DCFS) and my youngest only got a very mild form of this consequence– because she was only three, after all, and was just beginning her adventures in juvenile delinquency.  (Okay, maybe that was a little strong.)

Anyway, the first day they pummeled me with requests, testing my resolve to truly ignore them.  They even tried to trick me into responding, but I was resolute.  I held firm.  And I cringed inside as the house became a disaster that I could not attend to.  I made meals for myself and my husband (we are really the only ones who eat the delicious meals I make anyway.  Why will kids eat boogers and dog food, but refuse to eat really dang stinking good meals made by their mother with love? I will never understand it.) My kids ate cereal and bagels they made themselves.  They kinda picked up the house… kinda.

By day two, they knew I was serious.  The anger died down as reality set in and they shifted their focus to making the problem go away as fast as possible.  They made a real effort to clean up the house. By bedtime, it was not up to my standards, but for kids working on their own, they did alright.  I kept my expectations reasonable– it was the effort they put forth that I was really looking for.  They were nagging each other to clean up instead of me nagging them, which was wonderfully awesome and annoying all at once.  I continued my heavy web-surfing schedule and observed their behavior in a very non-intrusive manner.

On day three, resigned to the task before them, they took care of business and did what they had to do to get this thing over with already.

On day 4, I decided to let them off for good behavior on the less than clean house the first day and end the consequence without adding an extra day… because I can be a sweetheart like that when I wanna be. 😉   My ears opened to their requests once again.  Their was much rejoicing and hugs all around.  We talked about the experience and how yucky it feels to be ignored.  We talked about what a blessing it is to be a family and to have a house to live in full of wonderful things like food and toys and clothes.  We talked about how God put us in families to teach us how to work together and to help each other and how He wants us to serve others so we don’t become selfish and lazy.

I set my laptop and aside and started cooking meals they hate again.  Order, was restored.  The desired effect was achieved.

Since that time, if they start to ignore me again, I say, “Do you really want to ignore me?”  Generally, that is enough to get them listening again, but I have repeated the process a couple of times when they seemed to forget the lesson learned.

Now, I’m sure you are blessed with children who listen to every word you say and jump to respond to your requests.  But, if you happen to have the very rare variety like mine who have selective hearing now and then, you might wanna give this a try.  It won’t work for every kid, nothing does, but it is a good one to have in your back pocket just in case.  😉