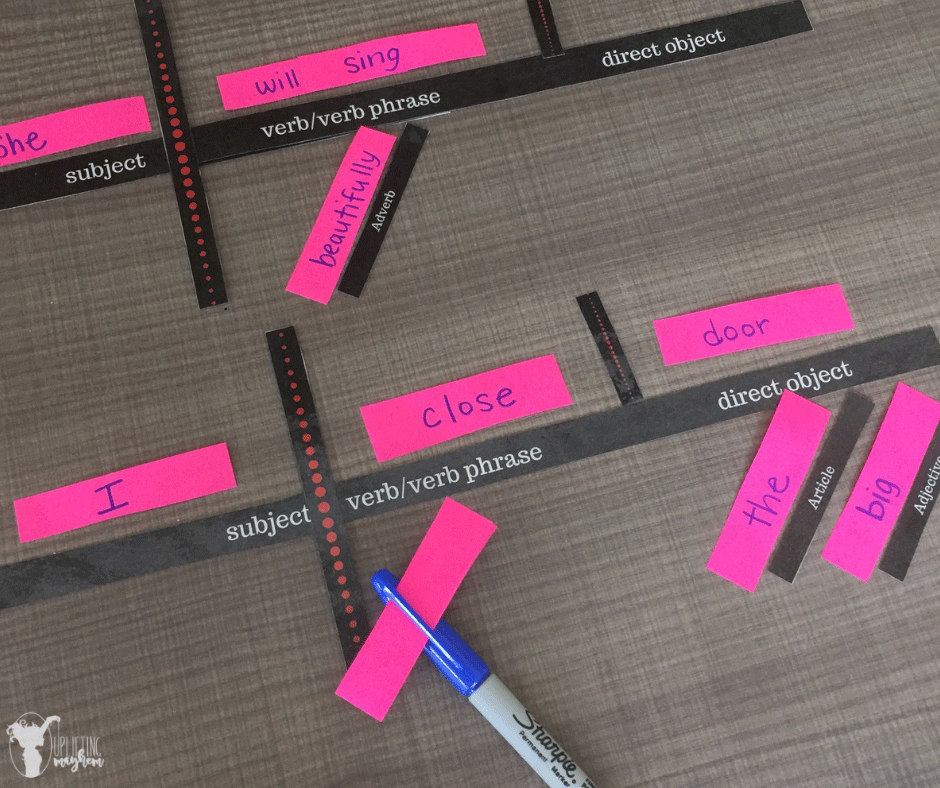 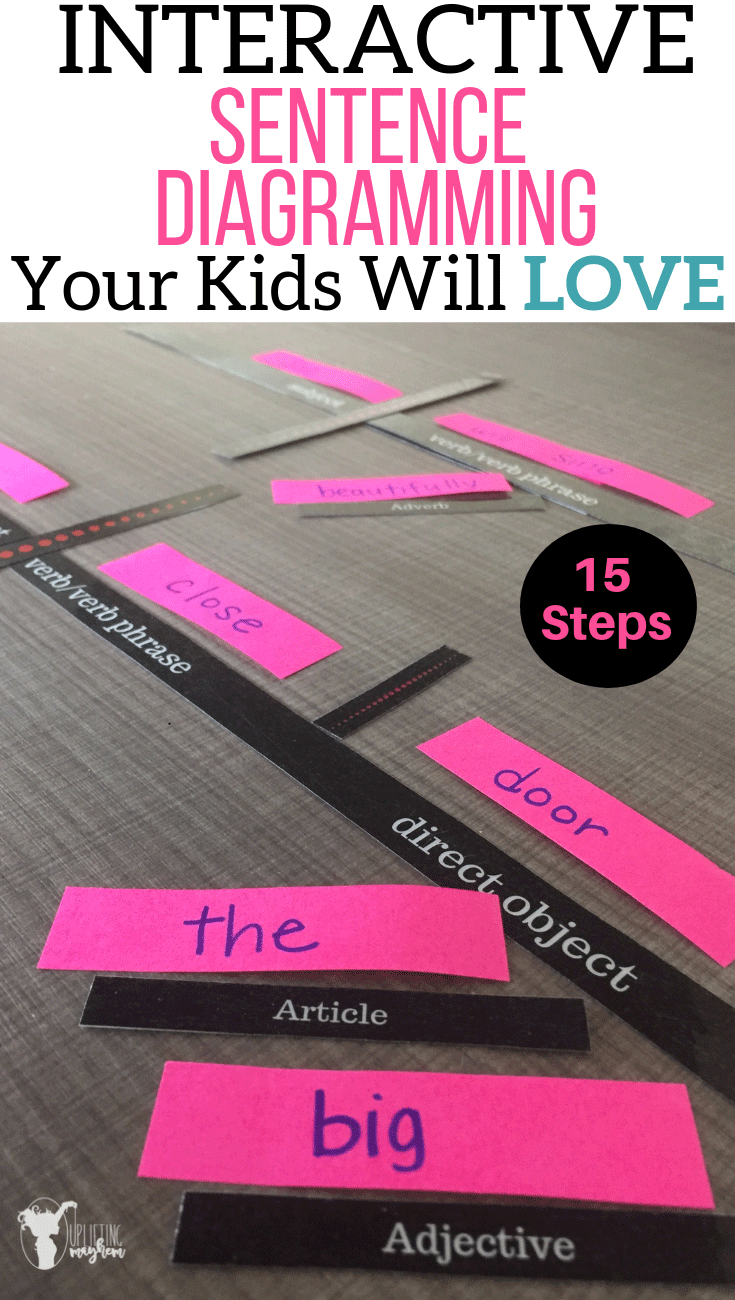 I have been homeschooling my boys for 4 years now, and am slowly learning what makes them tick! I have found that some like writing their sentences on paper while others like to build their sentences.

This post will not only go step by step of how to teach diagramming, but it also includes a free printable to have your child build the sentences as they diagram them. If your child is a kinesthetic learner, that likes to do things with their hands, this is a fantastic option!

I learned everything I know about diagramming sentences through jennyphillips.com. She has a phenomenal homeschooling curriculum that is affordable and comprehensive. I am not getting paid to share this with you, I just truly love her stuff. I have learned right along side my boys as I have taught them from her stuff.  Under each step is a link that takes you to a video done by Jenny Phillips explaining each step (if you homeschool, check her out!! Trust me!).

Honestly, I look at really long complex sentences and try to diagram them, and I get lost very easily. For those of you who want to master diagramming, or have to learn it for a class, I hope this works for you!!

Before you begin, create your diagram by either drawing it on a paper, or building it with the interactive diagramming sentence manipulative as shown in the picture. Download using the link below and cut out each piece. Keep in an envelope.

You can place a magnet on the back of each on to use on a magnetic board. My boys like to do that and it is easier to moved them around. Cut a sticky note up in strips and write one word of the sentence you are diagramming on a sticky note. Pictures below show a great example of how to use this interactive sentence diagramming tool. 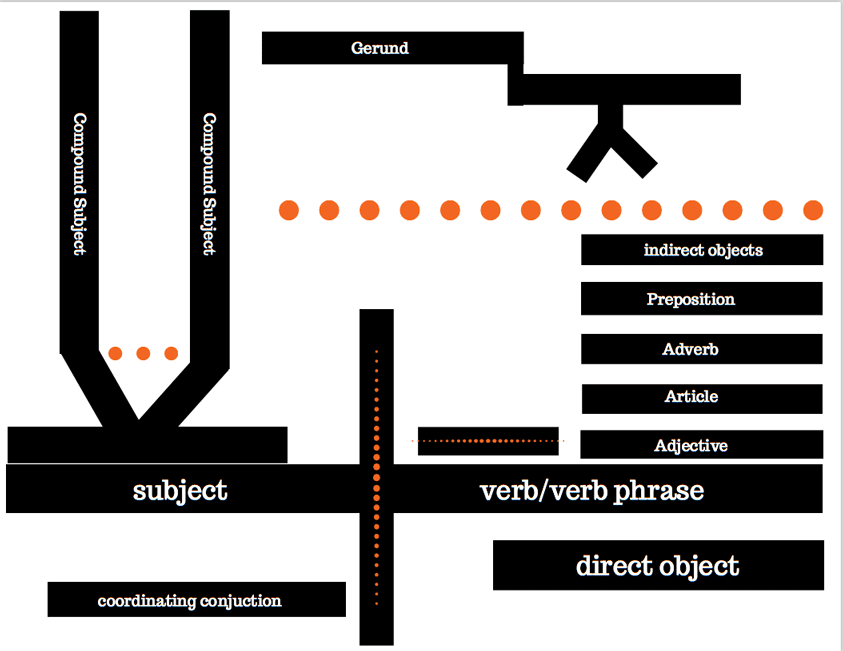 Step #1 – How to diagram subjects

With any sentence you diagram, determine the subject first. What or who is the sentence talking about? The subject doesn’t need to be a person, it could be any kind of noun to which the sentence is referring to. Write the subject to the left of the vertical line

Step #2 – How to diagram verbs

What is the verb in the sentence? What is the subject doing? Take that verb and write the verb to the right of the vertical line.

Step #3 – How to diagram Articles

This one is an easy step, as there are only 3 articles. Write the articles (A, AN, THE) on a the slanted lines under the words they modify

Step #4 – How to diagram Adjectives & Adverbs 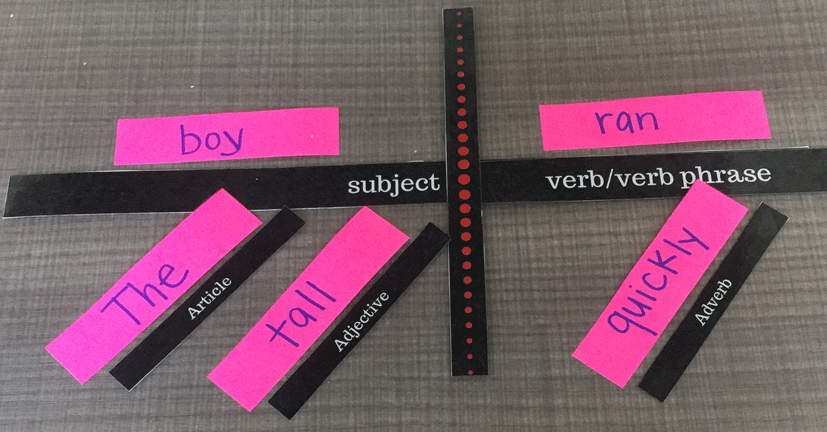 Step #5 – How to diagram Direct Objects

Step #6 – How to diagram commands

What do you do when the sentence is a command without a subject? (Example: Shut the door.) In the subject line, you still put the implied subject in parenthesis.

The next 2 steps have to do with compound sentences, subjects, verbs and direct objects. Don’t be afraid by the word compound. All it means is that 2 of something is included in the sentences. Compound subjects means 2 subjects (Example: John and Joe jump high). A compound sentence is simply two sentences within one sentence. Now that we got that big word out of the way, lets continue to step #7.

Step #7 – How to diagram compound sentences

This step may look complicated because there are a lot of words and lines going on, but really this step is teaching how to diagram a compound sentence. A compound sentence is when a sentence has two complete independent clauses connected with a coordinating conjunction. All this means is that each sentence can be a sentence on it’s own and has a word connecting the two. (Example: Jill jumped high but Sam jumped higher)

There are only 7 coordinating conjunctions and Jenny Phillips uses an acronym to help remember these.

This acronym is FANBOYS:

When you see two independent clauses with one of these words connecting the two, you simply diagram the first clause first. You move to the second clause next and you place the coordinating conjunction in the middle with a dashed line connecting the two verbs. 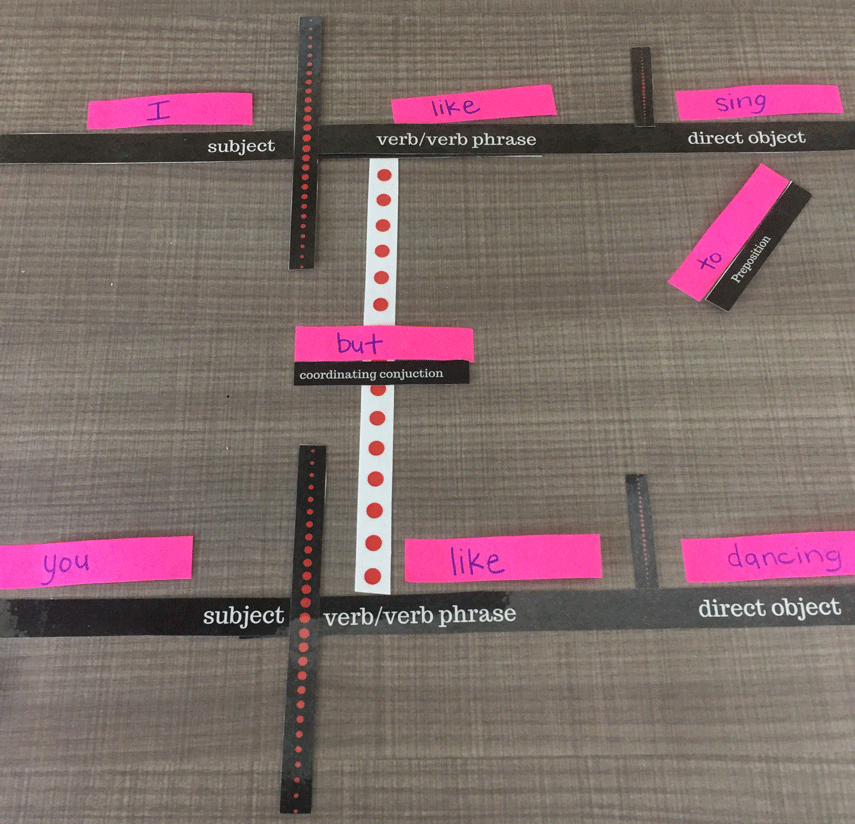 Step #8 – How to diagram compound subjects, verbs and direct objects

Alrighty! This step focuses on compound subjects, verbs and direct objects. Whenever you have any of these (remember a compound means there are two in one sentence).You simply split the baseline into two lines and add a dotted line between. Each compound word goes on the lines and the the conjunction is written on the dotted line.

Step #9 – How to diagram verb phrases

What the tarzan is a verb phrase you ask?? It is simply a verb with a helping verb attached. Examples: Will jump, Should drive, could ride, must run). This phrase goes to the right of the subject, where you would put a verb. 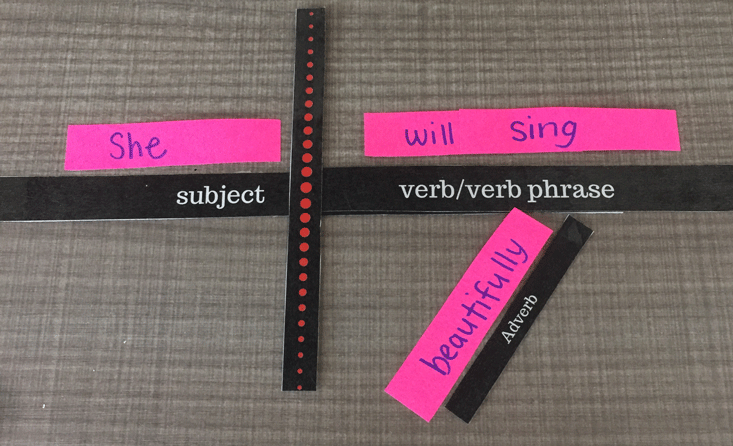 Step #10- How to diagram a complex sentence

VIDEO ON A COMPLEX SENTENCE

Step #11 – How to diagram a predicate adjective

In all of my school years, I never remember learning about a predicate adjective.This is yet another thing I have learned while homeschooling my boys.

As discussed in Step #4 and adverb describes and adjective or another adverb. Once you start getting multiple of these in one sentence (Example: extremely happy person, very loudly sang) just add another slanted line slightly below the existing adjective/adverb that it modifies and fill it in.

VIDEO ON ADVERBS THAT MODIFY ADJECTIVES OR OTHER ADVERBS

Step #13 – How to diagram prepositional phrases

First off, what is a preposition? A preposition express a position in time or space (Example: into, in front of, underneath, during through). Ask yourself this question, “What is the position of the subject or verb?”.

Prepositional phrases will always start with a preposition, but doesn’t have to be at the beginning of a sentences. This would confuse my boys for some reason. When you find a preposition, put it under the noun or verb that it is referring to on a slanted line. Right below the line draw a horizontal line where the direct object of the preposition will be put. If there are any words that modify that direct object, place them on slanted lines below.

Step #14 – How to diagram indirect objects

If you have made it this far I applaud you!! Great job because now we are going zigzagging!

Gerunds are verbs that act as nouns and end with ING. (Example: Diagramming is like a puzzle) Put the ING on a lower stair step and the rest on the upper step. Connect this step to the main horizontal line with some stick figure legs. The gerund is not always in the subject space. (Example: My mom likes singing songs). The object connected to the gerund, stays with the gerund.

Just like anything that is hard, it takes practice! In your next book you are reading, pick out a sentence and diagram it. My family loves to do read alouds and each of my boys also has a book that they read to me one on one. I like to pick out an easy sentence out of the book we are reading, and grab our interactive sentence diagramming pieces to diagram that sentence with.

My boys love it and this makes it so it isn’t as mundane as a worksheet. It’s more of a puzzle to figure out where all of the pieces go. Sometimes when you see a bunch of sentences on a white paper, it seems a little overwhelming. Grab a sentence that your kid likes and go to town! Enjoy using this hands on interactive sentence diagramming tool.