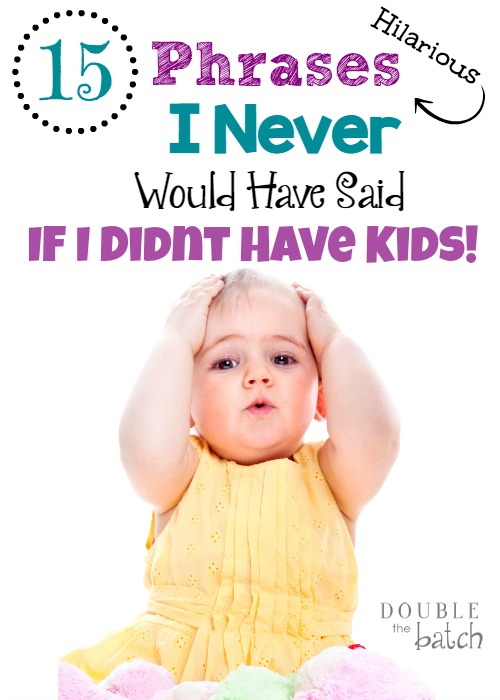 Remember that T.V. show – Kids Say the Darndest Things?  Well, I feel like since becoming a parent, the darndest things keep coming out of my mouth.  Things I never dreamed I would have a reason to say.  I’ve actually said things to my children and then thought to myself, “Did I really just say that? Why would I say those words?”  And not just the classic lines your parents said to you that you catch yourself saying to your kids.  I’m talking just really weird warnings, reprimands, and requests based on the strange and unreasonable things you find your children doing all day long.  So, here is my list of the top 15 phrases I never would have said if I didn’t have kids.

(Before you start reading this, in my defense, let me just say that a lot can happen while you are nursing a baby or changing over the laundry.)

My son has a weird obsession with licking bricks.  Anywhere we go, I find him licking bricks, rock fireplaces, tile grout– I don’t get it.  Is he missing some mineral that makes bricks look delicious for some reason?  Anyway, I frequently find myself asking him not to lick the bricks. 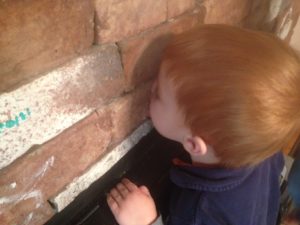 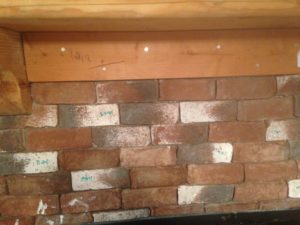 (And while we are at it- to my 7-year-old- Please don’t write everyone in our family’s names on our fireplace in green marker!)

I can understand that it looks like cereal, but that doesn’t explain why they would take a second handful or why they would have repeated offenses every time we go to Grandma’s house (we don’t own a dog.)  It can’t possibly taste good. It also makes me twice as furious when they refuse to eat the delicious food I make for them (as mentioned in my previous post.)

3- Sweetheart– please don’t eat the flour out of the canister!

I came down the stairs one morning to find my then 2-year-old daughter crouched on my counter top, covered from head-to-toe in whole wheat flour, and her cheeks packed full of it like a chipmunk storing acorns.  I don’t know how she could even breath there was so much flour in her mouth.  Apparently, she had seen me use it to make pancakes and figured it must be just delicious. I so wish I could find the picture of this to share with you.

4-Don’t climb in the fridge!

Another day, I came in the kitchen to find my 5-year-old trying desperately to fit her whole body in the refrigerator and we had to discuss how this was both a ridiculous and dangerous idea. 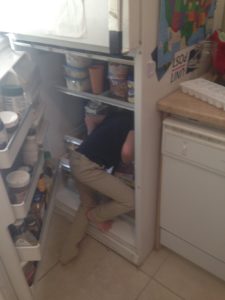 5- Don’t paint your face with toothpaste!

My then 10-year-old, who for sure should have known better, tried this one out.  Have you ever done this?  It is a very painful and foolish idea. Especially if you put it under your eyes. Don’t ask my how I know that.  😉

6- Why are you painting the walls with poop?

I came upstairs to get my 18-month-old daughter up from her nap on three different occasions to find she had practiced her Picasso skills on my walls and her body with the contents of her diaper.  I’m still in therapy over that one. I didn’t document this event as it was too horrifying and something I hope to be able shut out of my memory forever.

7- We NEVER put beads up our nose!

Why do kids look at any small object as something fun to stick up their nose?  My daughter was 2 when she found a bead with a hole in the center on the floor and decided it would fit perfectly in her nose.  Upon discovering it, I tried every method I could to help her get it out.  Because it had a hole in the center, she couldn’t blow it out, and it wouldn’t suction out, and I really did NOT want to make a trip to the ER over a bead up the nose.  So, after several hours of attempts to get it out, which basically looked like the equivalent of me wrestling a slippery squeally little pig -I ended up with a hysterical little girl on my hands.  In desperation, I swaddled her so she could  not cause me to accidentally hurt her by writhing about, held her head still with two of my limbs and very gently pulled it out with some tweezers. Who knew a bead could cause so much stress!

8-We NEVER puts screws in our mouths!

I had taken the little screws out a toy one day in an attempt to fix it.  I thought I had picked them all up, but apparently one got lost in the carpet, and my four-year-old daughter found it and decided to put it in her mouth. Naturally.  Well, suddenly I hear terrible coughing and gasping noises in their bedroom and she screams that she had swallowed a nail.  Horrifying words for any parent!  Long story short- it was a blunt-ended screw, so that was good, but she hadn’t swallowed it– she had inhaled it which is bad.  Like a trip to Primary Children’s Hospital, put her under, and pull in out of her lungs with a scope, $4,500 later bad. 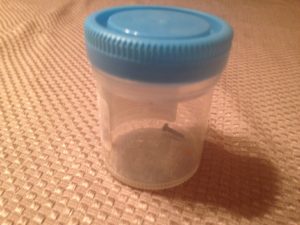 That is the most expensive screw we have and will ever owned.

My 2-year-old- loves his brand new baby sister and is really sweet with her most of the time.  When ever he notices her being cute he comes over and, with a really sweet voice and expression, says, “Baaaby. She’s cute. Kiss! Kiss!”  He then gives her about 15 kisses on the head… followed by a quick scratch with his nail that makes her burst into tears.  I don’t understand what inspires the scratch at the end, but I now know it is coming and can protect her against it. 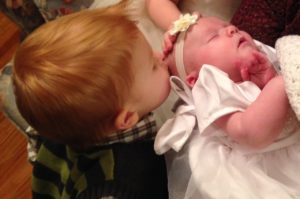 Yeah- he seems all sweet and innocent–it’s a precious moment and then…WHAM!

10- We don’t take dead birds to school in our backpacks!

Really.  I had to say those words.  My 3rd daughter started kindergarten this fall and one morning she was telling me about a dead bird she saw on the driveway.  She wanted me to come see it.  I told her to leave it alone and I would check it out later because we were in a hurry to get to school on time.  Well, apparently, while I was loading her little brother in the car, she wrapped up the dead bird in one of my dish cloths and put it in her back pack, because, she told me later, “She didn’t want a cat to eat it while she was at school.”  I found out from her sisters that she had been showing it to kids at recess and one of the teachers had to take it away from her.  Awesome mom moment. “What- I didn’t know dead birds weren’t allowed at school! Sorry about that! I won’t send one with her ever again!” Niiiice. 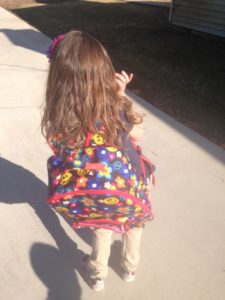 Who could know what was lurking in that adorable little backpack…

11- Don’t take your younger sister on a joy ride across a busy street in your Grandpa’s Jazzy Scooter!

My husband bought a scooter for his dad who has a hard time getting around and it was sitting with a dead battery under our carport.  Until one day I look out the window to find that my then 10-year-old daughter and her industrious boy cousin of the same age, decided to charge that baby up and take it for a few spins across the street to their grandma’s house.  I don’t actually remember that situation making me very happy.

12- Don’t take a whole box of graham crackers in the tub with you!

Umm… that was fun to clean up.

Do you know what that smells like in a diaper? I do.  Minty pickles.

14- Don’t put the whole bag of mini carrots in the milk jug! 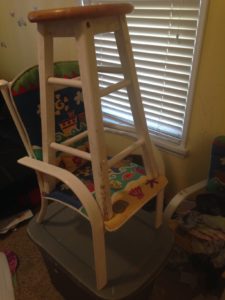 I’m sure no one could possibly get hurt  using this set up. Were they trying to get to heaven or something? It seems a little excessive, don’t you think?

I know I am not alone in this. What are some weird things you’ve found yourself saying to your kids?

If you enjoyed this post, you might enjoy this other post from Trish on how to get your kids to listen, or this post from Katie on some great ways to show those crazy kids you love them.